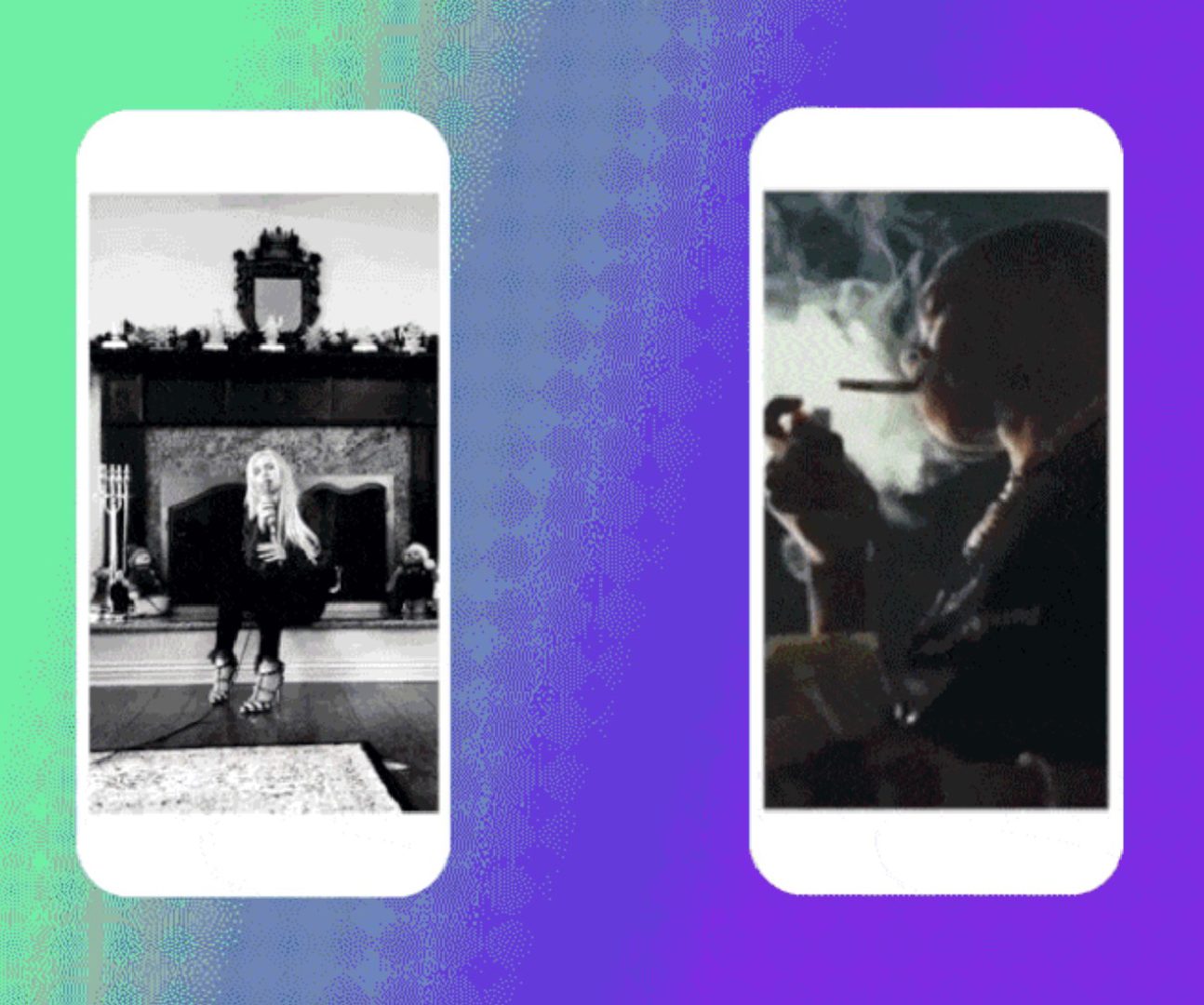 iLOVEFRiDAY, Ava Max, & CalBoy have all blown up thanks in part to apps like TikTok & Dubsmash.

Before Wisconsin-born singer Ava Max scored a Top 40 hit, she decided to change her style of music, opting to transition from “slow R&B” to upbeat pop. On Dec. 15, 2017, she put out one of her first songs with her new sound, “Not Your Barbie Girl.” The 25-year-old singer would go on to release songs like “My Way” and “Slippin” through Atlantic Records in early 2018, but both failed to make a chart impact. Although “Not Your Barbie Girl” didn’t become a huge hit either, it did change the trajectory of her career.

“‘Not Your Barbie Girl’ was released almost a year before it went viral,” said Ava over the phone. “I just put it on SoundCloud and YouTube, and eight months go by, nothing. And then all of a sudden, I see all these videos on TikTok. And it’s spreading like wildfire.”

For the uninitiated, TikTok is a social media app for creating and sharing 14-second videos. It has been downloaded 80 million times in the US alone and nearly 800 million times worldwide. In August 2018, TikTok’s parent company, Bytedance, merged the app with musical.ly, a popular app with similar features it already owned. Within a month, TikTok surged past Facebook, Instagram, Snapchat, and YouTube in monthly downloads.

TikTok enables users to make videos with trending songs or upload their own to use in clips. The app features a library of song snippets, but you can also upload your own audio which other users can then use. TikTok also offers editing tools like effects, filters, and the ability to slow down or speed up video.

These features enable TikTok to be a powerful tool for Generation Z, which has usurped millennials in defining cultural trends. Having been born after 1996, Gen Z has a natural understanding of how to consume and create content with a few taps of their fingers. With a combination of robust features and a massive distribution platform, TikTok has become an incubator for memes—and an emerging source for the next viral hit.

The best example of TikTok’s power may be the viral phenomenon of ​iLOVEFRiDAY’s “Mia Khalifa,” which saw an explosion in popularity thanks to a meme that has become an identifier within the TikTok community.

In October 2018, a popular TikTok user named nyannyanncosplay uploaded a video of her dancing to “Mia Khalifa” while lip-syncing to the following lines:

Hit or miss
I guess they never miss, huh?
You got a boyfriend, I bet he doesn’t kiss ya
He gon' find another girl and he won’t miss ya
He gon' skrrt and hit the dab like Wiz Khalifa

Taking TikTok’s already-bubbling #hitormiss dance challenge to another level, the clip found another life of its own by spreading to other platforms such as YouTube, Twitter, and Instagram. As a result, “Mia Khalifa” rose to the top of Spotify’s Viral Top 50 and maintained a position near the top of the Genius Top Songs chart for the next several months.

The rise of “Mia Khalifa” aligned with the rapid ascent of TikTok, as the #hitormiss challenge took off just after the app had surpassed competitors like Instagram and Snapchat. As such, community members adopted it as a way to locate other TikTok users.

In December 2018, TikTok user isstomahs flipped #hitormiss into a new challenge called the #tiktoktest. The idea was to find out if there were any other TikTok community members in a public place by yelling “hit or miss!” and waiting for someone to respond with the next line.

As a short-form video app that generates viral hits, TikTok has earned comparisons to the now-defunct Vine, which was responsible for popularizing songs like Bobby Shmurda’s “Hot Nigga,” Denzel Curry’s “Ultimate,” and Silento’s “Watch Me.” While the content on Vine was more widely consumed and spread outside the app, however, TikTok is more self-contained. It has a wide audience creating and riffing on memes well before they spread onto the wider internet of more well-known apps like Instagram, YouTube, and Twitter.

“TikTok is a really effective distribution network, because of all the mechanisms that it has for discovery within the app,” explains Taylor Lorenz, a staff writer for The Atlantic who writes about how social media platforms affect society and culture. “So, maybe you’re finding a funny clip, like a funny comedy skit, to recreate and use that audio; or you’re finding hit songs. Within TikTok also, there’s a lot of song discovery mechanisms so you can search [for] music really easily and find stuff that resonates.”

TikTok isn’t the only app which has the potential to create or significantly boost a viral hit. For the past few years, Snapchat has been partnering with artists for its Music Lens feature, which provides users with a custom filter playing a song snippet.

Ava Max is well-acquainted with the benefits of partnering with Snapchat. Her breakout song, “Sweet But Psycho,” was still bubbling in October 2018 when she partnered with Snapchat for a Music Lens. Awareness of the single skyrocketed as new fans shared it with their friends on the app. It nearly doubled in Genius daily pageviews, only adding to its growing momentum.

While Snapchat gave “Sweet But Psycho” a boost, the private sharing nature of the app hinders its ability to popularize songs. To give users the opportunity to engage in a more participatory experience, the company recently created a Lens Challenge platform that allows them to more easily share and create viral filters.

As “Sweet But Psycho” continued to grow into a hit, however, TikTok began to play an even greater role in its popularity. Fans on the app have used it as the soundtrack for makeup tutorials conducted on a potato—a riff on the surgery on a grape meme.

In other words, not long after the success of “Not Your Barbie Girl” on TikTok, Max’s “Sweet But Psycho” also got a boost by trending on the app. “Sweet But Psycho” is now a Top 40 hit—the first of Max’s young career and proof that changing her style was the right move.

In addition to TikTok and Snapchat, the once-popular lipsync app Dubsmash has found new life amongst black teens for creating hip-hop dance challenges in the lane once occupied by Vine. According to Forbes, people of color make up nearly 95 percent of the Dubmash’s user base, and 25 percent of black American teens use the app on a regular basis.

Rising Chicago rapper CalBoy found success with his breakthrough hit, “Envy Me,” thanks to a dance challenge created by a Dubsmash power user named Nayah. After hearing the song while scrolling through her feed in late November, the 17-year-old Instagram influencer created the soon-to-be-viral video for her #NayahXTweaking challenge and uploaded it to her then 650,000 Instagram followers.

“This girl made a video to that part [of the song],” Nayah said about creating her dance challenge. “So I asked her for the Dubsmash . And then that’s when I started listening to the song for real and it was really fire, so I thought it should be on my playlist.”

Thousands of Nayah’s Gen Z cohort followed her lead, and a YouTube compilation of clips from TikTok, Dubsmash, and Instagram surfaced just a few days later that earned over 300,000 views in less than a week. Not coincidentally, “Envy Me” surged in Genius pageviews during the same timeframe as people looked up the lyrics.

As of February 28th, “Envy Me” sits at No. 42 on the Billboard Hot 100 thanks to more than 45 million YouTube views and nearly 40 million Spotify plays. While a co-sign from veteran Windy City rapper G Herbo gave the song an initial boost, CalBoy is well-aware that it wouldn’t be as big without his teenage fans participating in the dance challenge.

“I don’t think it would’ve grew as fast without the young wave behind me doing the little group dances and stuff,” CalBoy told Genius. “I knew it was going to hit a wide range of people when I seen the kids, the babies dancing. I see the old people dancing to it. Different races dancing to it.”

Although Dubsmash has less powerful discovery and video editing tools than TikTok, the main thing holding it back from being a true competitor is a smaller platform. As such, power users such as Nayah primarily use it to shoot dance challenge videos before uploading the clips to more popular apps like Instagram and YouTube.

Much like Vine before its demise, TikTok and other video-sharing apps are empowering Gen Z to mint the next rising artist by making it easy to create, edit, and share content inspired by their favorite music. iLOVEFRiDAY saw a one-off diss track reach unimaginable heights, while Ava Max received confirmation that her sound was headed in the right direction, and CalBoy became one of the most successful young rappers in Chicago. Whether the apps will find long term success is yet to be determined, but for now, the results speak for themselves.

Skip back to main navigation